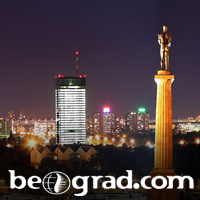 The information contained in this web site is protected by international copyright laws and it belongs to beograd.com.

Permission to use information delivered from this World Wide Web server and related graphics is hereby granted for non-commercial personal use.

Information contained herein may not be reproduced in any form for further commercial or non-commercial distribution without specific, written prior permission.

For permission to publish contact (416) 352-6080 phone/fax or write to webmaster@beograd.com

The name of beograd.com or the beograd.com logo may not be used in advertising or publicity pertaining to distribution of this information without specific, written prior permission. beograd.com makes no representations about the suitability of this information for any purpose. It is provided „as is“ without express or implied warranty. Information provided on individual WWW pages is supplied by the individual companies whose presence is promoted on those pages and they are solely responsible for its content.

beograd.com disclaims all warranties with regard to this information, including all implied warranties of merchantability and fitness and in no event shall beograd.com be liable for any special, indirect or consequential damages or any damages whatsoever resulting from loss of use, data or profits, whether in an action of contract, negligence or other tortious action, arising out of or in connection with the use or performance of this information.

beograd.com does not collect any individually identifiable information on its visitors.

beograd.com has been in operation since 1995. As the most visited site regarding Yugoslavia it has about 1.6 million page views (Impressions) per month. It receives visitors from 40,000 individual IPs per day, from over 100 countries.

The site has two major roles: it is a news site about Yugoslavia, with live news reports, comment and analysis; and, it serves as a portal, providing links to other media, non-profit and business sites in or about Yugoslavia. Editorial judgment is used when selecting which new sites to link. Discussion groups provide the opportunity to exchange views among visitors. Web-based e-mail is also offered as well as e-commerce content.

During the war in Yugoslavia in 1999, analysis of the content by major news organizations such as Reuters, AP, CNN, Sky, BBC, recognized that the content published on beograd.com pages was accurate and available hours ahead of other sources. We are have since been quoted in their news reports.

beograd.com is supported from the contributions by its visitors and from advertising.

beograd.com does not support or endorse any political party, movement or ideology. It’s goal is to present to the world all the different opinions from Yugoslavia. It excludes attacks against any ethnic, religious and racial groups; calls for or endorsement of any illegal activity or practice; and graphic sex and violence except where part of a news report.

beograd.com is owned and operated by Exuco Inc. under the laws of Ontario and Canada.

Story behind Beograd.com has begun in 1995 when it was put in operation for the first time. At the time it was envisaged as a news portal promoting business and tourism in former Yugoslavia intended for ex-pats, tourists, and other people who were in any way interested to learn more about the country and keep updated on latest developments. We provided news about former Yugoslavia, with live news reports, comment and analysis, as well as the links to other media, non-profit, and business sites in or about the country.

Several years later, in 1999 to be more precise, the war broke out and Beograd.com set up a war news page that had soon developed into a large undertaking. We had provided up-to-the-minute news of NATO bombing in Serbia, supported with photographic and sound material. Due to the NATO bombing the power was cut in Belgrade, but we acquired a generator and kept reporting the news uninterruptedly.

Beograd.com was the first to report many stories that were shared by majority of the mainstream media (AP, BBC, CNN, Reuters, Sky, etc.) and, as the most visited site about former Yugoslavia, it had about 1.6 million hits per month, 40.000 visitors from individual IPs per day from over 100 countries.

Today Beograd.com has a different form of news broadcasting. We have embraced social media sources like Instagram, Twitter, Flicker and Facebook to provide our online community with active around-the-clock feeds of events, lifestyle and people in Belgrade and Serbia. Also, by streaming content with particular hash tags, our goal is to inspire the community to have an interactive role in creating and sharing the news, to take on different roles of social engagement on Internet.

Beograd.com does not support or endorse any political party, movement or ideology. It excludes attacks against any ethnic, religious and racial groups; calls for or endorsement of any illegal activity or practice; and graphic sex and violence except where part of a news feed.

Beograd.com is supported from the contributions by its visitors and from advertising.

Beograd.com is owned and operated by Exuco Inc. under the laws of Ontario and Canada.